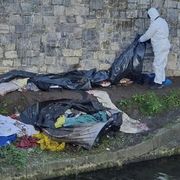 A homeless man is in a serious condition in hospital after a council clean-up vehicle removed his tent from the banks of a canal as he slept inside.

The unnamed man has undergone surgery for "life-changing" injuries following the incident by Grand Canal in Dublin, which is being investigated by police.

Gardai told Sky News that the man, whose age is also unknown, had been asleep in his tent during an operation to tidy the canal walkway on Tuesday afternoon.

He was taken to St Vincent’s Hospital, where he remains in a serious but stable condition.

Gardai said their investigation is ongoing and Dublin City Council, which carried out the work with Waterways Ireland, said that it was also reviewing what happened.

In a statement, the council told Sky News the tents had been "placed in a precarious and dangerous location".

"An individual was injured during the process and was taken to hospital," it said.

"The Dublin Regional Homeless Executive is currently liaising with the hospital and every support is being provided.

"Our thoughts are with the man at this time."

The council added: "The Executive has been engaging with the individual for some time and accommodation remains available to him.

"Every action that is taken by state services is taken in the interest of the health and safety of those individuals experiencing homelessness.

"The matter is currently being investigated by the Gardaí and there will be no further comment."

RTE reports that Irish Prime Minister Leo Varadkar has been made aware of the incident.

The taioseach told the broadcaster it was his understanding that council and Waterways Ireland did check the tents before removing them, but "obviously something has gone wrong here".

Irish housing minister Eoghan Murphy has called for a full report into what happened.

He tweeted on Wednesday: "My thoughts are with this poor man as he recovers in hospital. I’ve demanded a full report into the incident which is under Garda investigation."

Reynhard Sinaga: Prolific rapist’s sentence referred for being ‘too lenient’

After a century-long ban, cameras to capture courtroom drama again