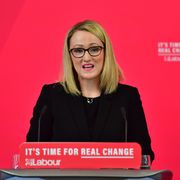 Labour leadership contender Rebecca Long-Bailey "personally" does not agree with current abortion law, it has emerged.

The Salford and Eccles MP has been revealed to dispute legislation that allows the termination of a pregnancy at any time, if there is a significant risk of the baby being born seriously disabled.

In England, Wales and Scotland an abortion is allowed up to 24 weeks into a pregnancy if authorised by two doctors.

However, an abortion can still be authorised beyond this time limit – and at any time – if there is substantial risk that if the child were born it would suffer from such physical or mental abnormalities as to be seriously handicapped.

In written answers to questions from local Catholic priests, submitted prior to the general election and uncovered by the Red Roar website, Ms Long-Bailey expressed her disagreement with this exception to the 24-week abortion limit.

The shadow business secretary said: "It is currently legal to terminate a pregnancy up to full-term on the grounds of disability while the upper limit is 24 weeks if there is no disability.

"I personally do not agree with this position and agree with the words of the Disability Rights Commission that ‘the context in which parents choose whether to have a child should be one in which disability and non-disability are valued equally’."

Ms Long-Bailey, who is Catholic, vowed to the priests that she would "play my part" in a public consultation on the detail of new abortion laws and regulations "in ensuring that your views are heard".

She also revealed that she "would never contemplate abortion" but has "tried to understand the agonising decisions many feel forced to make and what support they would need".

Following the focus on Ms Long-Bailey’s views on abortion, one of her rivals for the Labour leadership – Birmingham Yardley MP Jess Phillips – posted on Twitter: "I always have and always will trust women to make the decisions about their bodies.

"For me that isn’t just a passive view, it has taken struggle and effort for that right to choose to exist. I will continue to be active in that struggle."

Sophie Walker, the founder of the Women’s Equality Party, said: "Women’s equality starts and ends with control over our own bodies.

"It would be deeply worrying if Labour’s front-runner and potential first woman leader did not trust women to make their own decisions."

A spokesperson for Ms Long-Bailey accused "fake news peddlers" of having "selectively quoted" the MP’s responses "to propagate a misleading narrative".

"Rebecca unequivocally supports a woman’s right to choose and has only ever voted in favour of extending the right to abortion, such as in Northern Ireland," they said.

The spokesperson added: "Rebecca’s response to the Deanery of Salford clarified the existing law and current Labour policy, stating that abortion procedures should be properly regulated, and that women’s reproductive rights and the decriminalisation of abortion should be maintained.

"Rebecca’s response was also a reflection of her own personal agreement with the Disability Rights Commission… rather than her view on policy.

"During any proposed public consultation a wide range of views would of course be heard, and it is Rebecca’s duty as an MP to ensure her constituents are able to respond."

Ms Long-Bailey’s campaign received a boost on Thursday when members of left-wing campaign group Momentum voted to support her for the Labour leadership.

Of the 7,395 people who responded to the group’s consultation of its membership, 70% backed Momentum giving its support to Ms Long-Bailey.

However, members were not consulted about their views on other candidates, merely being asked: "Should Momentum follow the National Coordinating Group recommendation to endorse Rebecca Long-Bailey as the next leader of the Labour Party?"

Momentum – who were key supporters of Mr Corbyn during his two leadership election victories – have pledged to "launch a huge campaign and mobilise thousands of supporters" to elect Ms Long-Bailey as Labour’s next leader on 4 April.

Nine killed and others missing as Indonesia footbridge collapses